The Shri Mahanandiswara Temple at Mahanandi is one of nine temples devoted to Nandi in this area. beloved Bull of Lord Shiva. More than 1500 years ago, this historic temple was initially built. Over the ages, it underwent several renovations, reconstructions, and expansions. The three Pushkarnis (Fresh Water Pools) and the biggest Nandi statue in the world are significant features of this temple. Prathama Nandi, Naga Nandi, Soma Nandi, Siva Nandi, Krishna Nandi, Garuda Nandi, and Vinayaka Nandi are the other eight Nandis. They’re all nearby.

Where is the Mahanandi Temple?

Mahanandi is located to the east of the Nallamala Hills and Forest; the temple’s major deity is Lord Shiva, also known as Mahanandeeswara Swamy. The temple is located in Kurnool District, Andhra Pradesh, near Nandyal. Within 15 kilometres, there are nine Nandi temples together known as Nava Nandulu; Mahanandi is the oldest and most significant of the nine holy sites. 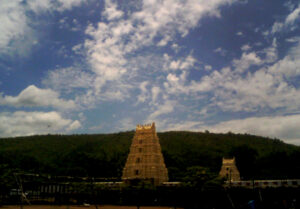 How to Reach Mahanandi Temple in 2023?

Orvakal Airport in Kurnool, which is 40 KM from Nandyal, is the closest airport. The distance between Shamshabad Airport in Hyderabad and Nandyal is over 250 kilometers.

Gajupally Railway Station, which is 6 kilometers from Mahanandi, is the closest station. Nandyal Junction, which is 19 KM from the temple, is the following closest railway station.

Numerous buses from Nandyal to Mahanandi were provided by APSRTC. Buses are available from a variety of locations, including Amaravathi, Hyderabad, Tirupati, and Srisailam. 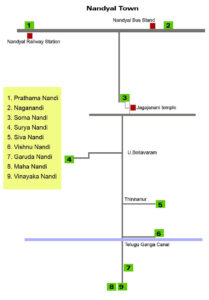 The seventh-century temple in Mahanandi is dedicated to Lord Shiva. One of India’s oldest temples, Mahanandiswara, has a history of more than 1,500 years. As per the tablet inscriptions from the 10th century, this temple has undergone several restorations and rebuilding efforts. The Chalukyas built the temple’s original building in the seventh century, and in the next ten and fifteen centuries, it underwent a great deal of expansion. The temple tradition claims that the region’s 10th-century AD rulers, known as Nandas, built a huge number of temples and worshipped Nandi, their ancestor god, at that time.

The black cow milk from Gopavaram village is said to be used every day for Abhishekam. The cowherd brings the cows into the forest to graze. Every day, one of the cows goes into the jungle to exude milk and returns home with an empty udder.

The cowherd followed the cow and hid behind a bush in order to find out why. The cow usually stood on the grass-covered ant hole, and a boy came out and drank the milk. The cowherd saw that people were mumbling away.

The King’s spies heard about it and informed him. The King was pleased and wanted to witness the same thing, so he gently followed the cow. The cow was terrified and rushed away rapidly, and its huff buried the hole, and the child disappeared.

The next day, the King, who had been very surprised, had a dream in which Lord Shiva visited and informed him that he had merely drank milk. He also gave him the order to build a temple. The following day, the king went to the pit and discovered Rock Pallus in its place. He was shocked to discover the cow’s hoof on the Shiva Lingam.

The King built the temple, excavated a pond in the other way, and called it Rudra Gunda. He created two ponds on the northern and eastern sides of the temple, entitled Brahma Gunda and Vishnu Gunda, which provide water to 2000 acres of productive land throughout the year.

In Mahanandi, pilgrims can stay in a variety of hotels, guesthouses, and lodges. The devotees can lodge at the Haritha Hotel.

What are the darshan timings in Mahanandi Temple?

What is the Mahanandi Temple open time?

Mahanandi Temple opens at 4:30 in the morning.

What is the Mahanandi Temple closing time?

The Mahanandi Temple closes at 9:30 pm.

No, online booking is not mandatory for Mahanandi Temple. However, it is advised to book in advance.

How much time does it take for darshan in Mahanandi Temple?

It depends on the number of devotees that have come around on that specific day. If the rush is too much in the temple, it might take 5-6 hours. Otherwise, 2-3 hours is enough to explore the temple.

Which God is worshiped in Mahanandi Temple?