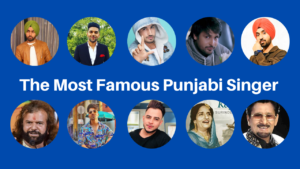 First, on the list, we have Guru Randhawa. In 2020, he was voted the most-streamed Indian music artist of the year on YouTube and topped as the no. 1 punjabi singer. His significant contribution to Punjabi music is worthy of recognition. ‘High Rates Gabru’ is one of his most famous songs.

Randhwa’s soothing voice, wonderful lyrics, and creative skills captivate the audience. He is a huge star in the Punjabi music industry. His incredible dancing abilities are a nice complement to his vocals. In addition to his dance talents, he is noted for his killer smile and stunning appearance.

Sandhu, a former cricketer, is well-known in the music and acting industries. He came to popularity as a result of the Jassi-penned song Soch and Joker, which showcased his incredible vocal powers. With the song Tequilla Shot, he made his debut.

Sandhu’s acting career was boosted by the film Yaaran Da Katchup. His duet with Nora Fatehi was super hit. Hardy became an instant national singing sensation with his super hits like Naah and Kya Baat Ay. In 2022, he is one of Punjab’s most popular performers.

Diljit Dosanjh is an Indian singer-songwriter, actor, and television host who works in Punjabi and Hindi movies. He is one of the most well-known singers in India. He also appears in Punjabi films such as Jatt & Juliet, Jatt & Juliet 2, Punjab 1984 and Sardaar Ji & all of which have been commercially successful.

Diljit Dosanjh is well-known for his soothing voice and consistent connection with his fans. His performances are noted for their high-octane excitement all around the world. One can never forget the ‘Sauda Khara Khara’ song because of his killer dance moves and energetic voice.

B Praak became famous with his song ‘Teri Mitti’. He is a well-known Punjabi performer and composer. Initially, he was renowned as a well-known music composer who wrote several successful Punjabi songs. With his superhit song Mann Bharrya, he began her singing career in 2018. He is regarded as one of the most well-known Punjabi singers in the year 2022.

Bala, Good News, Pati Patni Aur Woh, and many others have included him as a voice actor. Filhaal, his most well-known song, was composed by him.

Neha, a very well-known Punjabi singer name, began performing at minor religious functions when she was four years old. She auditioned for the second season of Indian Idol, but was unfortunately eliminated early. She then became well-known with her tracks such as Yaariyan’s “Sunny Sunny” and Queen’s “London Thumakda”.

Her “Mile Ho Tum” song became most viewed Bollywood song on YouTube. She is currently a member of the prestigious jury of an Indian idol show. She is also regarded as one of Punjab’s most gifted singers.

Karan Aujla is without a doubt one of the top Punjabi singers and is presently India’s most popular performer. This singer-songwriter from Khanna, Punjab, has risen to become India’s most popular digital artist. This is due to his recent blockbuster debut album BacThaFu*UP, which is now trending in over 20 countries around the world. In the Punjabi music industry, Karan Aujla’s success is extraordinary.

India’s Gurmukh Singh “Garry” Sandhu is an actor and singer. He has a great reputation in the Punjabi music industry. He made his singing debut in 2010. Illegal Weapon, Yeah Baby, Banda Ban Ja, and other hits are among Garry’s many hits. His song illegal weapons 2 is one of India’s most successful music videos, further enhancing his star power.

Sidhu Moose Wala is one of the most popular Punjabi singers names. He came to fame in the Punjabi music industry at a young age. sidhu moose wala was born in Canada and began his career as a lyricist. He became the most popular singer and actor due to his incredible musical sensibility. sidhu moose wala has millions of followers who enjoy hip hop, rappers, gangster rap, and Punjabi music. High, Tochan, Sohne Lagde, 295, Poison, and Jatt Da Muqabla are some of his most well-known songs.

In his acting carrier, he made his debut in the film Mr.& Mrs. 420. Jassi and then started his carrier in films such as Dildaariyan, Dil Vil Pyar Vyar, and Sargi.

Jassi won the PTC Punjabi Filmfare Award for Best Debut for his outstanding performance in the Punjabi film Mr. & Mrs. 420. Lamborghini, Nikle Current, and Surma Kaala, among others, have captured the hearts of Punjabi music fans.

She was born and raised in Lucknow, India. She’d always wanted to be a singer, so after divorcing her four-year spouse, she decided to move to India with her children. In 2012, she released her first song, “Jugni Ji,” for a music video, which established her career in India. The music video was a commercial success right away, launching her into the Indian music scene. “Baby Doll” became most sensational song of that year.